Architect Frank Gehry "I Have an Idea" 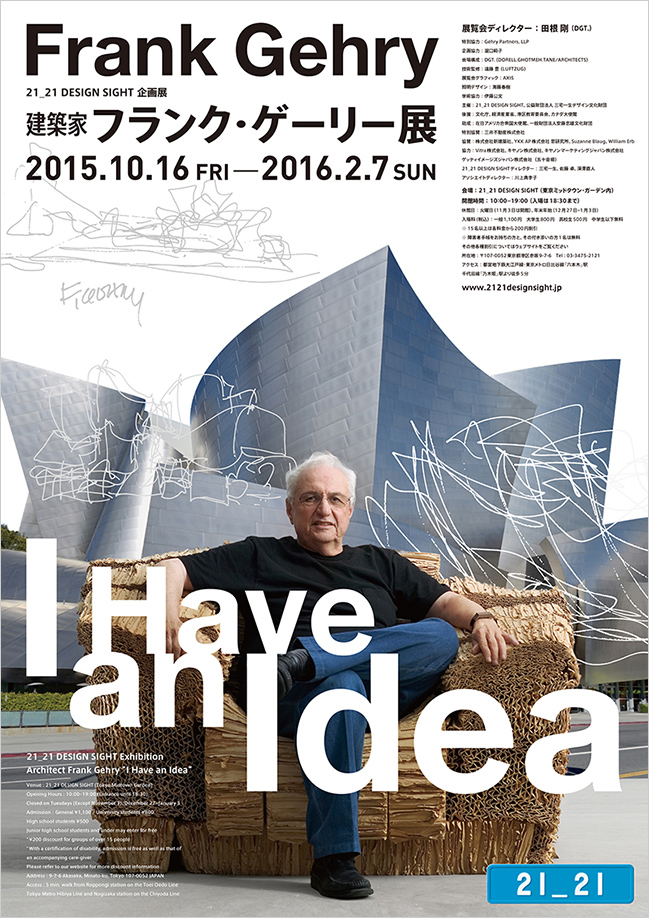 Gehry has continuously defied architectural norms for over half a century. The exhibition focused on his ability to come up with the ideas behind his work. Tane sought to illustrate how Gehry's ideas were conceived and took forms such as buildings. These appeared to be quirky but were indeed designed for real people. Tane expressed this through Gehry's own words along with an extensive number of models made for each project.
Date: October 16, 2015 - February 7, 2016

So you get an idea. A stupid idea but you like it. So you look at it till you don't like it. So then you make another model as another way of looking at the first stupid idea; and you like it but only for a little while. So then you hate some of it so you make another model to fix it but it looks different but you like it so you look at it until you start to not like it then. You try to fix it and a new idea comes out which you like better and then you don't like it so much but still a little. So guess what you do? Yes you make another model. So this goes on and on and on till you got so many models it costs a fortune to store them. But you go on anyway. More and more till voila the piece de resistance. It's glorious, it's cheap, it looks different. So nobody likes it.

You'd cry, you'd nearly die. Then the lord sends a messenger. He hypnotizes all the people so they all like the idea. They want to steal the idea, they want to steal the models. They want a piece of your mind and soul. But you're strong and don't give it.
You just want to make a new idea. You want to be alone to make new models - so expensive to store, and you keep going until you're broke from storing the models.
That's a major histoire. It's legendary and it's true.

The sequel is people get jealous. That's good if it makes them work hard to be better. Most of the time they work harder to destroy. This part's difficult.

"The Age of Ideas" has begun. We live in a global era and environment where design, architecture, and art now command more public attention than ever before and information is disseminated instantaneously. This is a great change from the 20th century, when the future was built with technology; perhaps it represents our desire for this era and environment to make our own future in which we can harness the power of Ideas to change a current stagnation of reality. Now, we need "Ideas."

"Do you know my manifesto?"
This was the first thing Frank Gehry asked me when I first met him in December 2013. "So," he said with a truly serious expression, "you get an idea. A stupid idea but you like it." It occurred to me that I'd been given a view of the long, hard road of struggle that Gehry had travelled.

"Architect Frank Gehry 'I Have an Idea'" is an exhibition of "Ideas." It looks into the birth of Gehry's architecture: Guggenheim Museum Bilbao, Walt Disney Concert Hall, Fondation Louis Vuitton, and what may be the origin of all these ? Gehry Residence. This exhibition asks how he creates the unprecedented and stunningly brilliant and the intricate yet distinctly human brand of craftsmanship behind? What kind of person is Gehry? What does he talk about? Where does he get his ideas? Where does he find the immense creativity and energy to make it and break it, and build up again the innumerable models used in the design process? How does he generate the many state-of-the-art techniques Gehry Technologies employs, all formulated from a deep knowledge of construction practices? How does he pursue so many radical products at the same time in so many different parts of the world?

Gehry's buildings are not based on overnight thoughts, cheap ideas, and spurs of the moment. Ideas are tested, built up and broken down, beaten and examined, bullied, and abandoned. Gehry believes in the toughest, most resilient ideas that survive the jealousies, temptations, and meddling of others. Designing a building requires a range of conditions to be fulfilled, including client requirements, functions, budget, time constraints, and regulations. Architecture, however, is beyond the realm of requirements and functions; architecture richly pursues "Ideas" to inspire "surprise," "curiosity," and "dreams."

There are no "Ideas" without positive aspirations.
We hope you will share Frank Gehry's faith in the power of "Ideas," the faith that gives him the courage to look reality squarely in the eye no matter how severe the difficulties he may face, and, with effort and conviction, take on the struggles and responsibilities of bringing ideas to reality.