KOME: The Art of Rice 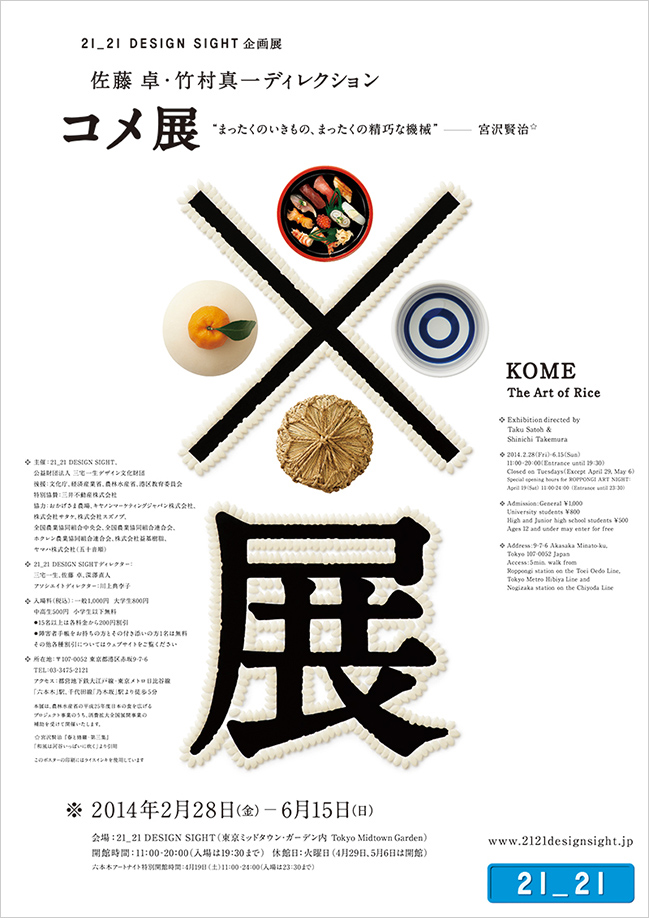 Kome: rice plays an integral role in the Japanese diet. Satoh and Takemura, a cultural anthropologist, reviewed the Japanese culture which has evolved around the cultivation and harvesting of this staple food. The exhibition featured displays on the conservation of the environment and landscape achieved through the use of paddy fields; various uses of straw; worshiping the spirit of the paddies; the connection between the agricultural/festival calendar and the movement of the sun and more to show how rice was much more than just food.
Date: February 28 - Jun 15, 2014

"KOME" as an exemplar for design

The cultivation of rice in Japan began in the late Jomon period. It became more widespread and advanced during the Yayoi period, in which systems for the mass production of staple foods were developed. Since this period, rice cultivation has met the nutritional needs of innumerable people. This was the beginning of mass-produced rice. Yet rice has had much influence on the culture of Japan in ways that are only indirectly related to its role as a life-sustaining staple food. For example, economics developed in Japan centered on the rice trade, work habits and cycles were established according to the need to cultivate rice while taking into account ever-changing natural and climactic conditions, implements and tools evolved to accommodate the work of rice cultivation, rituals evolved to pray that natural disasters did not occur, and from those rituals, a performing arts culture developed. There is a direct link from the ingenious methods for collecting the rains from the heavens and feeding them to lower-lying fields to the civil engineering technologies of today. Furthermore, rice paddies nurture a great many types of creatures. The straw left after rice is harvested has been used as roofing, to make sandals, in the making of tatami mats, and to package eggs and natto beans.

The word "rice" in English refers to the food, plant, species, etc. Yet the Japanese word kome has many more implications, as its importance in the culture transcends that as a mere food. It has defined the personal relationships, socioeconomic mechanisms, and modes of living that have characterized life in Japan for centuries. We believe that these elements are an inherent part of excellent designs that have originated in Japan, and for this reason, we embarked upon this project.

The overarching emphasis placed on efficiency in the current age has limited our view of the future to that of just the near future, a perspective that has led to the loss of many things we once held important. With the "KOME : The Art of Rice" exhibition, our greatest hope is to direct people's attention to these things.

Rediscovering "KOME" as a global food

The magic of agriculture multiplies one grain one-thousand-fold. This means that if a bowl of rice contains about 3,000 grains of rice might have been the product of just three grains. And the only things needed to grow it were the right amount of sunlight, water, and air (CO2) necessary for photosynthesis. This seemingly ordinary process is borne the "cosmic organ" that is rice, which every year is an invaluable, life-sustaining source of food. "They are living things, they are precision machines." This observation by Kenji Miyazawa perfectly captures the sense of wonder that rice plants deserve.

It should go without saying that plentiful harvests are collaborative results by both people and nature. Around 10,000 years ago, when the human race first began cultivating rice, a single rice stalk probably amounted to just several dozen grains, yet the magical fact that a single grain can now multiply a thousand times over is a product of the work of many generations of people, people who evolved together with the rice plant.

Moreover, the role of rice paddies does not end at growing rice. Rice paddies are like instruments that tune elements such as water and the climate, and a cradle of diverse life. The landscapes of rice paddies and settlements at the base of mountainous areas seen prominently in Japan and other humid parts of Asia are indeed manmade, in that people have manipulated nature. It should be noted, however, that the Chinese character representing "made" in the compound "manmade" symbolizes the role of people in mediating the heavens and earth. Rice and rice paddies are proof that humans play a creative role in their capacity as members of the global ecosystem of this planet.

The future of rice in Japan is unpredictable. The pressures posed by the Trans-Pacific Partnership (TPP), the lack of successors to family farms, and other socioeconomic factors have been amply noted, but at a more fundamental level, namely at the level of culture and lifestyle, rice in Japan is coming to a major crossroads.

Even as Japanese culinary culture spreads across the globe and elements of Japanese culture become listed as the intangible cultural heritage of humanity, the dietary tradition of "rice, one soup, and three vegetables" is gradually being lost. Not only are Japanese people eating less rice, the notion that abstaining from sugars and carbohydrates has even gained some popularity as abstaining could increase odds of living longer.

The true power of rice, however, should not end with such fads. People think they know everything there is to know about rice and therefore take it for granted, yet we would like to look at rice from new perspectives. We want to view rice in terms of its future potential―rice in the "future tense," so to speak. As issues of climate change and food crises become increasingly serious, we should think about the potential of rice as a staple food of a planet whose population is approaching nine billion. More specifically, we should look back on the history of the cultivation of rice and the cultures it fostered over a period of ten thousand years and consider its potential as a "future food" or "universal human food" in that context.

This was part of our intent in planning the "KOME : The Art of Rice" exhibition.
Please join us as we explore the incredible possibilities of rice as a "vital organ" of human life.

*This exhibition is being held with the aid of the Ministry of Agriculture, Forestry and Fisheries.