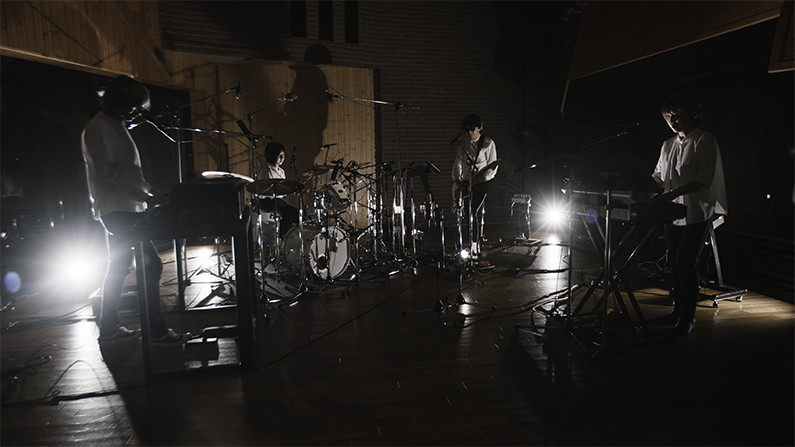 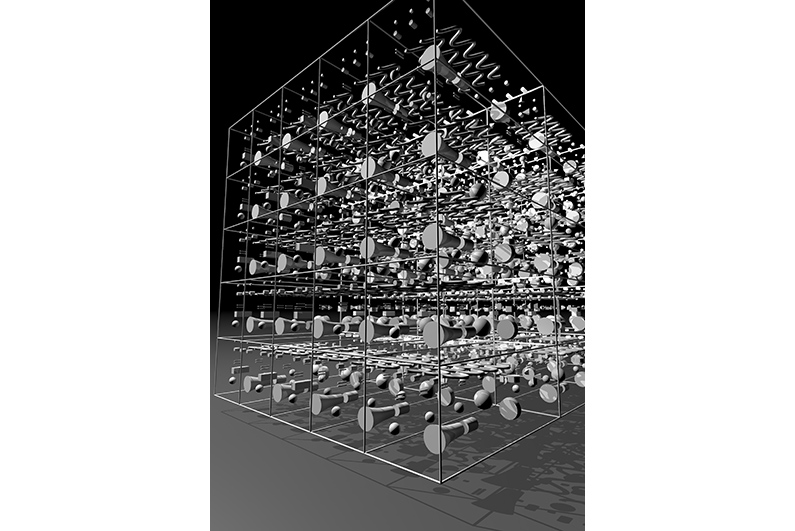 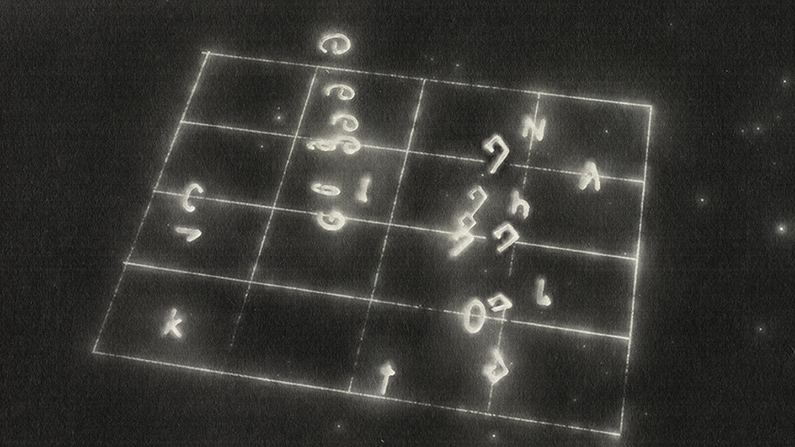 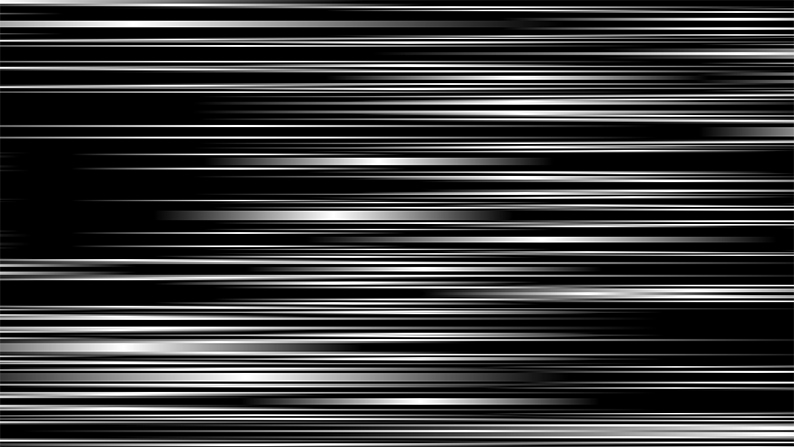 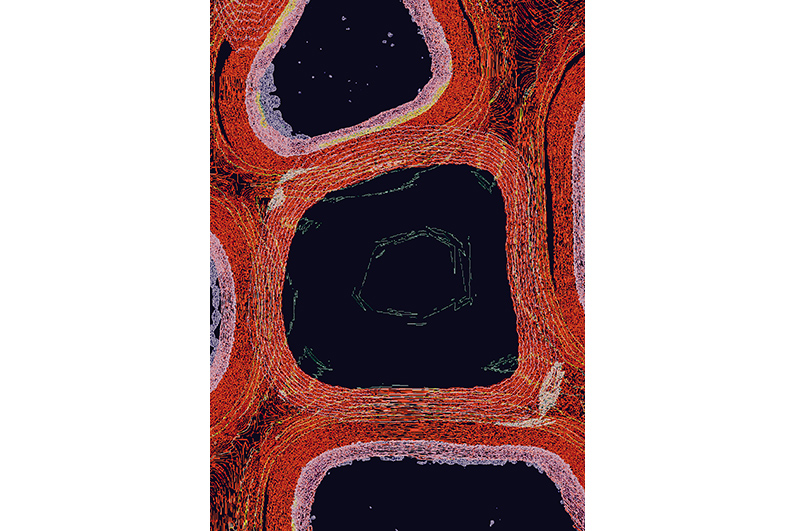 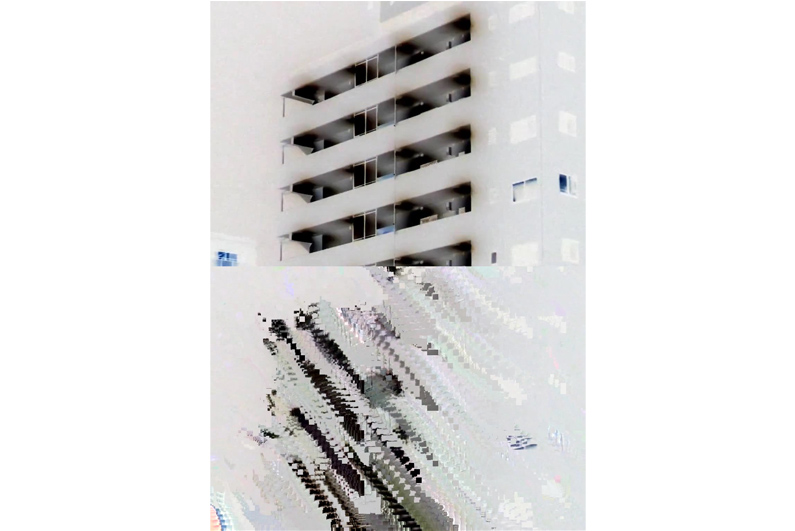 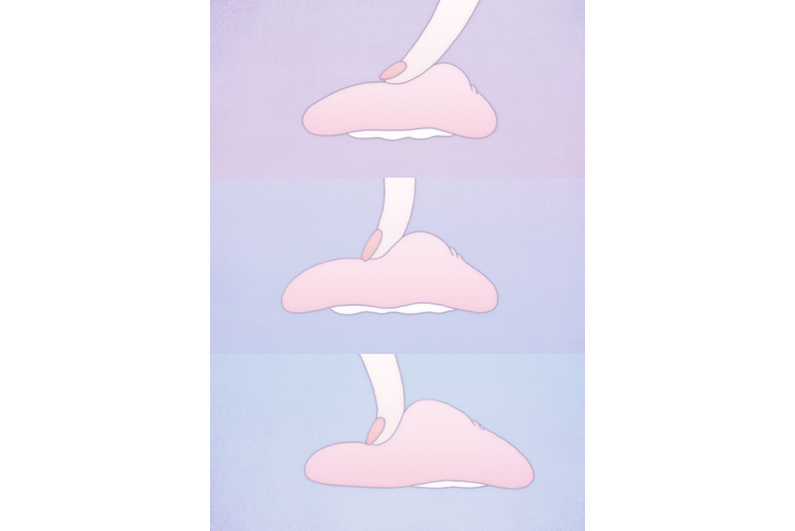 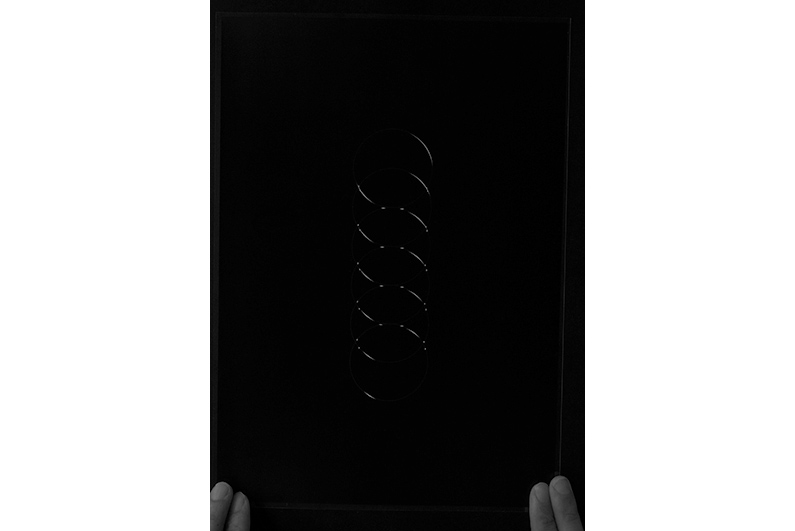 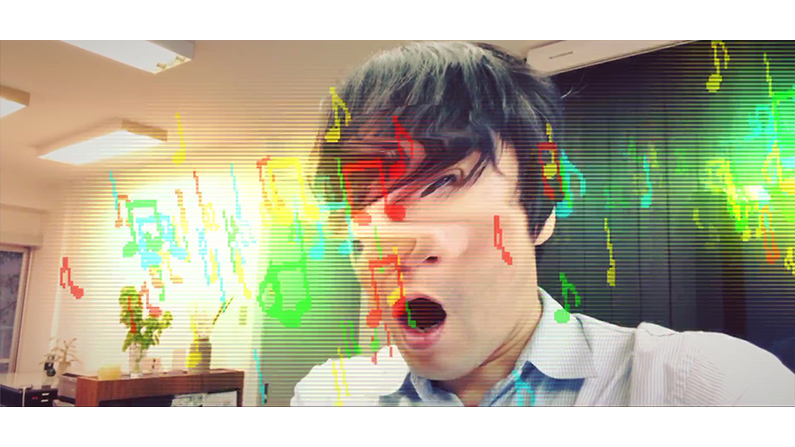 These video works record a live studio performance of "AUDIO ARCHITECTURE," building the audio architecture through accumulation of discrete elements of sound and making visible the inherent groove of the sounds.

The "cocktail party effect" refers to the phenomenon of focusing on a particular sound while tuning out others such as when you pay attention to the voice of the person you are talking to amid many other voices, or when you catch an interesting subject being discussed at the next table in a crowded room. Keita Onishi, who believes that when we listen to music, we are "using not just our hearing but various other senses as well," has interpreted all the sound elements that comprise the musical piece as individual motion graphics, and reconstituted them in a single space.

Ryo Orikasa, who has used the texts of authors, poets, and philpsophers such as Oscar Wilde, Yoshiro Ishihara, and Roland Barthes as motifs. He puts symbols into a musical piece and breathes life into its movements. Each time the letters of the alphabet ﬂoat oﬀ the ﬂat surface, they cast oﬀ the yoke that ties the signifié (concept) and signifiant (sound-image) together and we celebrate the creation of a new language.

Hiroaki Umeda creates dance works with an awareness of images (light) as an environment as well as a background. He puts the motif of the "structure of muscle fibers" up against the structure of the musical piece and depicts movements that couple with the temporal ﬂow of the sound.

This video work expresses the complexity hidden in the act of listening to music by considering and seeing "something that pulsates like a living organism" and depicting the sequences of its cross-sections. The work expresses the membrane ‒ border line - that brings music into being a single phenomenon.

This video work by UCNV, who portrays the aesthetic of digital images with damaged structures, juxtaposes normal images with their damaged versions to suit the structure of the lyrics: "the contrast of antonyms." The two images that should be projecting the same content instead mutually evoke the reality of parallel worlds, causing glitches in how we hear the sound.

Yoriko Mizushiri produces animations that tickle the tactile sense of viewers and fiddles with their insides with the humorous and sensual movement of lines, focuses on the structure that compares various senses within the lyrics of the musical piece and expresses the microscopic deviations of the senses. Multiple familiar objects such as sushi, tissue paper, and balloons are lined up and at first, they seem to move in sync. However, because they are each drawn separately, small diﬀerences in their shapes and movements naturally emerge as they move.

This video work is composed of multifaceted visual eﬀects created by layering two transparent films on which simple patterns are drawn. It was shot using a motor to move the film at a constant speed or moving the film manually in time to the AUDIO ARCHITECTURE track. It has been edited to optimize physiological comfort.

You are listening music, while watching "yourself listening to music." Your image overlaps with the visual eﬀects linked to the music. By incorporating the "person listening to the music," traditional structure of the music video will integrate with viewer as one. Please download app with a dedicated smartphone, and make your own interactive music video in various places with friends together.
http://kitasenjudesign.com/jido-rhythm/